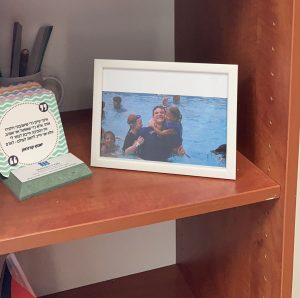 Last week marked 6 years since Ezra was taken from us. That evening the phone rang and on the other side a frightened Davida told me that Ezra had been shot and that I should go to Jerusalem. I turned on the TV to stories on the news about an American boy who was injured in a shooting attack. The trip to Jerusalem was longer than usual. In the various phone calls I tried to understand what was happening and where to go, wanting to believe that in the end everything would be okay. Unfortunately, the reality was very different. The next day the front pages of every newspaper had Ezra’s picture printed on it. The reality from that moment became different.

Ezra was my camper for two years. He was a boy full of the joy of life, who loved messing around. He was always getting into trouble. While never alone in his troublemaking, he was always the one that got caught. He did not make life easy for me and my staff.

We didn’t see each other for two years until he became a counselor. I remember one conversation on a Saturday night where we laughed at the past, the kind of camper he was and his character as a counselor. The boy of yesteryear had become an amazing, handsome, tall, responsible young adult. That summer was a big lesson for me as an educator. Everyday, I try to see what’s behind the curtain with my students. To see the soul and real person behind the children that I meet every day at school. This year is my first year acting as a High School principal. In my office, I placed a picture of Ezra so that I would remember every day that it is my duty to be an educator who sees, knows and does not miss anyone along the way. To be a better educator and be a better person.